Riot Insurance For Your Car

Life in South Africa is a riot, can you afford to be without riot insurance?

It was in 2012 that South Africa earned the title of ‘Protest capital of the world’, and things aren’t letting up one bit. Riot insurance for your car has become a real consideration.

Riot Insurance for the Day Your Dreams go Up in Flames 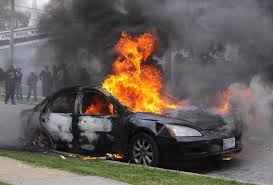 Every South African has a right to be seriously concerned about their safety and their property’s safety.

Widespread looting and massive damage to property has meant many South Africans having to re-look at their insurance policies to see whether their cars and other property are covered for damages.

Riot insurance for your car is important because South Africa’s recent history is one of political and social activism, resulting in severe damage to property. Most times your insurance isn’t going to cover this kind of loss, and it is for this reason that people ensure that SASRIA cover is part of their insurance policies.

SASRIA is state-owned and provides cover for loss or damage to insured property because of riots and strikes.

It is important for anyone with short-term insurance to make sure that SASRIA riot insurance cover is included in their underlying policy. It applies to personal property such as cars, homes and household contents as well as commercial property being vandalised.

There is vehicle insurance in South Africa which covers damage to vehicles as a result of a riot, but every car owner simply needs to check with their insurance companies what exactly their riot insurance cover entails.

Most companies offering insurance will add SASRIA cover to an insurance policy and this can be done for a very small amount each month.

SASRIA (South African Special Risks Insurance Association) was formed in 1979 to provide insurance cover for special political risks such as riots, strikes and labour disturbances. Sasria SOC Limited is a short-term insurance company whose mission it is is insure all the people and businesses that have assets in South Africa.

Sasria cover is designed to strengthen the insurance that is offered by insurers, but that is excluded on the basis of it being caused by extraordinary circumstances that the insurance companies are not prepared to assume risk for.’

To get riot insurance for these events, clients need to have a conventional insurance policy for their business, and then Sasria will provide add-on benefits to that insurance product.

One of the best ways to protect yourself from riot damage is to stay right away from where the riots are happening. However rioting can flare up anywhere, anytime in South Africa and living in such a country requires being covered for every event.

Act now to request a car insurance quote. Please complete and click to submit the form on this page